As students gathered to support the pre-thesis art show, various works were admired for their aesthetics, deeper meanings and connections to the artists. Though some appreciate the time and process that it takes to create the pieces, most fail to realize one of the most significant factors that influences the means of creation: funding.

According to students closely associated with the arts department, funding is a complicated issue with unclear procedures and guidelines.

“There’s no money and you don’t know where to go because there’s not a lot of direction in terms of the people who are supposed to be giving us at least a push in the right direction,” Sculpture Lab Teaching Assistant (TA) and thesis student Zoe Heuermann said.

“We don’t know what to do. We’re just confused and sad and broke,” art thesis student Rebecca Miles said.

Every year, each discipline gets a lump sum of money from the college’s Education and General (E&G) fund. The E&G fund is made up of student tuition money, fees and money provided by the state.

“The E&G funding does pay for the salary and benefits of the faculty,” Associate Vice President of Finance Kimberly Bendickson wrote in an email interview. “In addition, the College’s E&G funding is used to support all non-auxiliary functions of the College—that is, covers the salary and benefits and operating expenses for the various pieces and parts that are New College.”

After removing fulltime and adjunct salaries and fringe benefits, the operating funds from the base E&G fund for 2016-2017 was as follows:

“This money is allocated to the Division of Humanities. It is up to the Division Chair to assess needs and allocate dollars as needed to support the division in total,” Bendickson wrote. “The College’s finance office does not get involved at this level. Our role is to ensure that all invoices that are submitted to payment are for allowable items within the state’s guidelines.”

Division Chair of Humanities Miriam Wallace estimated that she manages $89,000 each year for the humanities department. Information about the discrepancy between the $196,000 figure from the financial office and the estimate provided by Wallace is unclear.

“One of the jobs of the chair is to learn how the budget works and then to make decisions about where you need to put money given immediate pressing needs or long term needs you can see that are coming up,” Wallace said.

Rather than supplying a fixed amount of money towards each individual discipline within the division–which is what the social sciences division does–the humanities division attempts to fund regularized annual needs in order to allow some flexibility for when new opportunities arise.

“The reason we don’t say ‘take the money and divvy it up among all the disciplines’ is that the needs are actually different. The thing that I want to be careful about is I don’t want somebody in a field to feel like ‘well we’re the poor discipline, we never get anything, nobody cares about us,’” Wallace said. “It’s always a moving target, so there are the things you know come up every year that we can get regularized.”

Teaching Assistants (TAs), for example, are part of the fixed annual expenses that Wallace plans for.

“That’s actually a very big piece of the budget, we use a lot of the money for student TAs and a lot of those go to art. The other place a lot of them go to is languages; that’s where there’s a lot of support because that’s where we really need it,” Wallace said. “But then specific needs come up in a year and I’ve been talking with Professor Burns, for instance, about new equipment in the sculpture studio.

“We have a new sculpture technician coming in, he’s going to be full-time, which has not been the case before and he’s got great experience, so we want him to look at the equipment and say ‘okay, what can we fix, what can we nurse along, what needs to be replaced immediately, what might need to be replaced down the road.’”

Wallace juggles the budget to make sure that certain things that need to be sustained, such as TAs, are going to be sustained while also thinking about potential emergency situations and the future of the division.

“We’ve got a list, but I want to make that better. We should be able to predict the art shows—I’ve just gotten real clarity now. I thought there were two, turns out there’s three. So we’re trying to build that in and say every year, let’s see if we can make this regular. I have the juried show in my budget set aside, but if I could get funding from the provost office to cover part of that, that may give me $500 to put somewhere else.”

Through an online request form that Wallace instituted, faculty members can ask for funding for certain events or materials. The form also provides Wallace with documentation of what was funded throughout the year and what kind of things may need to become more regularized.

“Last year, Professor Anderson said ‘it would be good if we could have more easels, it would be good if we could have some more taboret tables’ so I said ‘okay, let’s buy this many this year and then let’s see next year if we can buy some more’ because if you buy everything in one year, then it all breaks at the same time. So we’re also trying to think about that,” Wallace said. “Art is a resource heavy area. It needs physical material resources, it needs people, it needs students to work as technicians and support services in sculpture studio after hours. Music, similarly, needs resources and has been under-resourced in many ways. So the trick is to get that balance right.”

Drawing, painting and sculpture classes have lab fees that are put in special accounts for the Division of Humanities to use for consumable supplies for those specific classes.

The school also partners with Home Depot and Art & Frame of Sarasota to help provide materials at a cheaper cost than the retail price.

The fees and partnerships are meant to help provide students with resources, but students often feel that the resources and amount provided are not sufficient.

“We’re pretty much expected to buy 90 percent of our supplies,” Miles said about drawing and painting classes.

When Heuermann took Sculpture I in 2015, supplies were given to students by former Assistant Professor of Sculpture Rick Herzog.

“I never bought anything for that class. But now I’ve noticed that all of the Sculpture I and Sculpture II students have to buy all of their own stuff,” Heuermann said. “They get some supplies, but it’s very, very limited.”

“They get cardboard,” Miles added, “and a limited amount of plywood.”

“Yes, it’s cheaper than buying an actual canvas, but at least provide the wood or something,” Miles said. “We have to buy all of our own paints, we have to buy pretty much everything if we want to make something.”

In addition, students claim that most materials are outdated.

“We have a lot of things, but they’re either not useful or not functioning correctly,” Heuermann said.

Students typically use screws to fasten their canvases. The sculpture lab, however, was out of screws, so students resorted to using nails. One of the nail guns broke, and the other did not fit the air pressure regulators that are provided.

“We have facilities; we have a nice painting room, we have a nice sculpture lab. We could have more, but we have stuff. But it feels like we can’t harness the full potential of what we actually have because stuff just literally does not work, or we don’t have access to stuff,” art thesis student Olivia Forero said.

“I wouldn’t call them lack of resources, but there are always places that one wants to fund more,” Provost and Vice President of Academic Affairs Barbara Feldman said. “And the other thing is you’re always trying to increase the facilities and make sure things are upgraded; the technology is where it should be, the facilities are up to par, and all of those sorts of things. There’s always something more you can do, but I don’t call it underfunded.”

Unsure of what else to do, art students have been going to the Council for Academic Affairs (CAA) to get money for their art supplies.

“We asked Kim ‘oh can we ask humanities to pay for some of our art supplies’ and Kim is like ‘no, they don’t fund us’ so we go to the CAA to get money,” Miles said.

The CAA recently updated its procedures to a system in which those who make up the council must purchase the requested supplies. This process takes a lot of time, as those involved must establish a relationship with certain vendors. The new process creates drawbacks for many students, especially those who need art supplies to be delivered before they present their pieces at a scheduled art show. 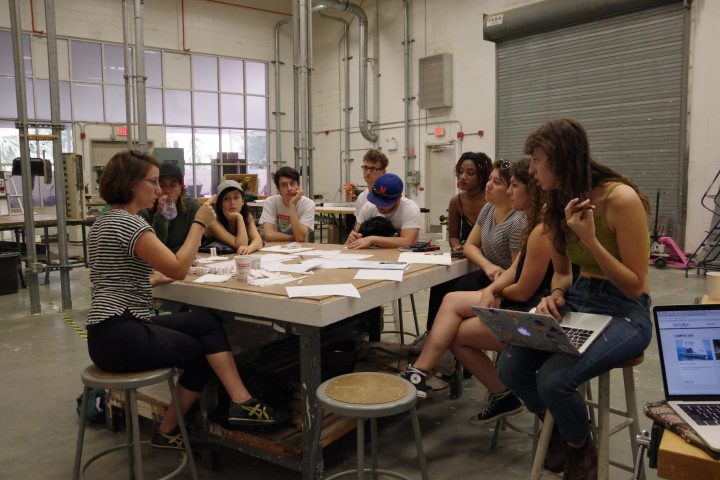 (Photo courtesy of Zoe Heuermann)
Interest in art as an AOC continues to increase. Students are concerned that the current organization of the art department, in addition to the amount of resources received, will fail to support the projected growth of students at New College.

The future of art at New College

As the school embarks on its five-year Growth Plan—in which student enrollment will grow from approximately 800 to 1,200—students fear that the art department will struggle if changes are not made.

According to Provost Feldman, the art department will gain the attention necessary to support the growth.

“We decided that we wanted to hire in the area of arts with the idea that arts are important here and have not necessarily been funded in the way that we like, and Sarasota’s such an artsy place, so we thought about ‘why would a student want to come to New College’ and one reason might be because of the arts, because you can study them and also be so exposed to it,” Feldman said. “And that would also mean that the institution is serving the community, because if we create students who are artists or know about the arts, they can contribute to what is a major industry in Sarasota, and so we’re serving the community in that way.”

Students who have been through the program, however, are not as optimistic.

“Last year we took Painting I and there were about six people. Now the class is totally full and there’s not enough of anything; it’s at max capacity and they’re not prepared for that,” Heuermann said. “It’s also difficult because even as the school grows and even as art classes grow, there’s only a limited amount of thesis space […] so they have to limit the amount of declared art AOCs.”

There are currently eight studio spaces reserved for thesis students in the Caples Fine Arts Complex.

“I don’t understand how they’re going to grow the student body by 400 students; once you get more people coming in here, it’s going to be unsustainable,” Sculpture TA and third-year student Abigail DeGregorio said. “At this point, it’s already on the threshold, if more people come in and nothing else happens, you literally will not be able to do art. It’s going to be subjective as to who gets in, which is messed up.

“You should be able to do art if you want to do art,” DeGregorio said.